Articles discussing rebel involvement in the conflict in Syria and Iraq and the threat posed by returnees often cite estimates by the Soufan Group. In this research note, I’m going to explain why this is problematic in relation to Russia, and identify some of the challenges in estimating how many Russians have travelled to the Middle East. END_OF_DOCUMENT_TOKEN_TO_BE_REPLACED

Earlier today, I posted a series of tweets reflecting on a claim by the allegedly Al-Qaeda-linked “Katibat Imam Shamil,” posted to Ani.mr, claiming responsibility for the 3 April terrorist attack on the St Petersburg metro. I’ve compiled the text of tweets below for convenience, although obviously the issue requires more detailed reflection.

END_OF_DOCUMENT_TOKEN_TO_BE_REPLACED

Media outlets and experts frequently treat women involved in insurgency and terrorism in highly gendered ways, depriving them of agency and relegating them to the role of mothers, monsters and whores. This gendered treatment has attracted some (albeit not enough) attention, including in relation to the North Caucasus itself – most notably in the work of Caron Gentry and Laura Sjoberg, whose excellent book Beyond Mothers, Monsters, Whores I just paraphrased. There is, however, a related issue that is even more frequently overlooked but that is highly deserving of consideration: gendered approaches to counterinsurgency and counterterrorism pursued by the authorities themselves. END_OF_DOCUMENT_TOKEN_TO_BE_REPLACED

Two videos have been posted to YouTube confirming the loyalty of the former leaders of the Chechen and Ingushetian sectors of the Caucasus Emirate (IK) to the Islamic State (IS). 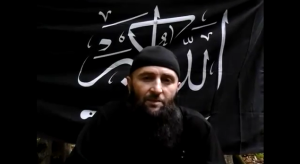 In the first video – 1 minute 47 seconds long and dated 1 Shaban 1436 (19 May 2015) – Aslan Byutukayev (Khamzat), the former emir of the IK’s Nokhchiycho Wilayah (Chechen Province), reaffirmed his pledge of bayat to IS leader Abu Bakr al-Baghdadi. Byutukayev’s statement consisted primarily of formulaic statements about shared goals and obeying al-Baghdadi as long as he adheres to the Koran and the Sunnah, and offered nothing by way of insight into future goals and strategy. Its greatest significance is in dispelling any lingering doubts anyone might have entertained about the authenticity of Byutukayev’s previous pledge, a June audio address that dealt the IK a critical blow (see my previous post, The Future of the North Caucasus Insurgency). END_OF_DOCUMENT_TOKEN_TO_BE_REPLACED

The North Caucasus insurgency has been in a state of flux since December 2014, when the emir and several lower-ranked commanders from the Dagestani sector of the Caucasus Emirate (IK) broke with the movement and publicly swore allegiance to Islamic State (IS) leader Abu Bakr al-Baghdadi. Numerous rebel leaders elsewhere in the North Caucasus subsequently followed suit. The IK was further undermined by the death in an April 2015 special operation of its leader Aliaskhab Kebekov (Ali Abu Mukhammad). Although much remains uncertain about the insurgency’s future, the apparent decision of Chechnya’s emir to now also swear allegiance to Al-Baghdadi provides sufficient clarity to offer some initial thoughts. END_OF_DOCUMENT_TOKEN_TO_BE_REPLACED

Caucasus Emirate leader Aliaskhab Kebekov (aka Ali Abu Mukhammad) is gradually starting to exert his ideological influence over the movement and distinguish his leadership from that of his predecessor, the late Dokka Umarov (aka Abu Usman), whom he succeeded in March. Having earlier sided with Jabhat al-Nusrah and Ayman al-Zawahiri in their dispute with the Islamic State of Iraq and the Levant (ISIL), Kebekov has now sought to impose clear limits on suicide bombings and the role of women in the insurgency. END_OF_DOCUMENT_TOKEN_TO_BE_REPLACED

Chechen Head Ramzan Kadyrov has set off a flurry of speculation over whether his nemesis – and leader of the Caucasus Emirate (IK) movement that is designated by both Russian and US governments as a terrorist organisation — Dokka Umarov is dead or alive. But, ultimately, Kadyrov is the boy who cried wolf, and absent either a body or confirmation from one of the IK’s “official” websites, few are prepared to accept his claims at face value. END_OF_DOCUMENT_TOKEN_TO_BE_REPLACED

Three terrorist attacks in Volgograd in a short period of time — a female suicide bomb attack on a bus on 21 October 2013, a male suicide bombing at the train station on 29 December 2013, and another male suicide bombing on a bus on 30 December 2013 — have attracted considerable media attention and prompted security concerns over the Winter Olympics in Sochi. A common reaction to such events is to imagine the worse and anticipate further attacks, in this case on the Games themselves. Given the dire security situation in the North Caucasus and what appear from the outside to be repeated security failures by the Russian security services (including the failure to arrest and obtain usable intelligence from alleged rebels), this doesn’t require a great stretch of the imagination. Nevertheless, there are a few reasons why the Volgograd attacks do not call for a rethink of the security situation at the Games and do not make an attack in Sochi more likely than a week ago. END_OF_DOCUMENT_TOKEN_TO_BE_REPLACED

This article provides some basic background details on a splinter group of foreign jihadists fighting in Syria that now calls itself the Muhajideen of the Caucasus and the Levant (MCL). Although a peripheral group even in the context of foreign fighters or jihadists in Syria, it is worth examining if only because even a small group of fighters can cause instability, and because its leader’s tendency towards self-promotion may manifest itself in other ways than the occasional video. Also, because Western media reporting about the timing of split and the orientation of the group has been woefully misleading (see Chechen Rebel Leader in Syria Quits. Long After Being Fired). END_OF_DOCUMENT_TOKEN_TO_BE_REPLACED

It’s interesting to see that a video showing Emir Seyfullakh, an ethnic Chechen rebel leader fighting in Syria, proclaiming his group’s separation from Jaysh al-Muhajirin wal-Ansar has garnered media and Twitter attention today. In reality, there’s little new in the story: Umar al-Shishani, a fellow Chechen who heads Jaysh al-Muhajirin wal-Ansar – a rebel group operating primarily in Aleppo Province that has a sizable contingent of fighters from the Former Soviet Union and that appears to have become part of the Islamic State of Iraq and the Levant – publicly split with Seyfullakh in early August. It is unclear whether the video is new – since the split, Seyfullakh has lost access to Jaysh al-Muhajirin wal-Ansar’s Russian-language media platform, FIsyria.com and appears to be reliant on new YouTube accounts to release his videos – but the story certainly isn’t. END_OF_DOCUMENT_TOKEN_TO_BE_REPLACED